skip to main | skip to sidebar


actual you tube player will be larger.
Posted by Ben Stookesberry at 10:21 PM 113 comments:

Hello from life in the fast Lane on the Hotel Charley Vol: 3 video tour. Jesse Coombs and I are running all over the Western United States with a 10 foot big screen projection and sound system in order to celebrate spring and the start of the 2008 summer kayaking season. And with an amazing snow pack caking the mountains over much of the Western United states there are many reasons for the big enthusiastic showings that we have had so far. Big thanks to

Alpenglow in Boise, ID; Silver Moon Kayak in Kalispel, MT; Montana Brewing in Billings, MT: the Bellingham paddle club in Bellingham, WA; Canoe and Kayak Magazine and the Redmond Outdoor Adventure Center in the Seattle Metro Area, WA; The Shed in Hood River, OR; Alder Creek in Bend, OR; Alder Creek Kayak in Portland, OR; Kokapelli Kayak and the Standing Stone Brewery in Ashland, OR; and Kokatat water wear, Matt Porter and the Six Rivers Brewery in Arcata, CA.

And this is just the beginning as we head through California to the Cal Salmon Fest, Mt. Shasta, Chico, Sacramento, ending the week with a big headline show in Reno on Friday night.

To promote my two favorite websites in the world Jacksonkayak.com and oregonkayaking.net we are letting all the folks at the tour events know about an Internet only release of 10 segments of the Crash Course on these two sites. These are the video episodes to accompany the April feature article of the same name in Men's Fitness Magazine where Jesse Coombs and I attempt to mold writer, adventurer, and class 4 boater Thayer walker into a competent class V paddler.

The latest Teaser to the upcoming release of Hotel Charley Vol. 3: The Lost World is here. Please check out www.clearh2ofilms.com for a complete tour schedule.

After one month and over 4000 miles of driving, the Central Brazilian huck mission has come to a resounding end at Salto Anaconda. Just days before the Crew of Ben Stookesberry, Jesse Coombs, Ryan McPherson, Chris Zawaki, and Pedro Oliva were slated to head home, the team stumbled across one of the runnable waterfalls on record Deep in Central Brazil.

We almost decided not to even bother scouting the falls after they saw that an easilly accesible falls upstream was far less than ideal, landing on rocks. However, the ever helpful owner of the property reported that a 21 foot Anaconda made the base of the second falls its home and that the group was bound to see it if they went down there. Well, we went down there and found an anaconda of a waterfall waiting with the maximum amount of aeration possible; although, the near flood stage level of the river made for massive currents and boils at the base that flushed into a overgrown class 4 flush that led into the real Anacondas home.

After a full day of scouting, contemplation, and working out the details of my would be line with Jesse Coombs, I decided to give the falls a go... For now I will leave the details of the descent to the upcoming video and articles to expose.
Posted by Ben Stookesberry at 1:29 PM 2 comments: 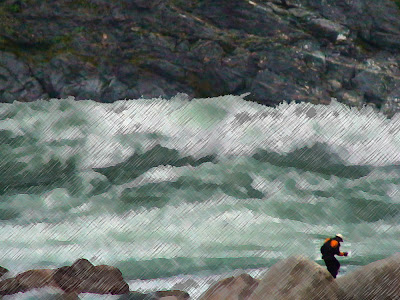 After spending a full morning on the massive put-in drop, it was time for Rush, Tyler, Brooks and myself to head downstream. The whitewater below indeed promised some great rapids to keep us busy for the rest of the day. A whole TV production crew would be following us on shore, capturing every other stroke we took. 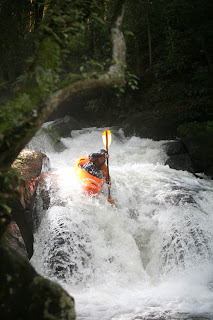 Running on not more than 400 cfs, the mile long section we ran was constantly steep. All appeared to be read-and-run, except maybe 5 major ones we got out to check out. “Boof left, drive right, cut behind the rock, boof again” is somehow what our lines would sound like, marinated in this super technical waters.

Hesitating about running the last one, finally Rush and Tyler decided to fire it up. Both of them having cleaned the line, Brooks and myself didn’t hesitate on nailing it again.

The amazing part about this section is not just that it has some amazing, challenging whitewater, and is all lined by trails on both sides, but it is actually right in town: Valle de Bravo special. Another mile of the run is yet to be explored, and it will.

The hardest part about first descending a waterfall is overcoming the fear of uncertainty. Trusting your scouting ability turns to be your only life insurance. You get in your boat and follow the line that you’ve come up with, hoping that it will make you successfully run the falls.

In the town of Valle de Bravo, Estado de México, Tyler Bradt, Rush Sturges, Brooks Baldwin and myself, started the river taking care of the entrée falls: a 45 footer, with a crooked lead-in and a log stuck at the lip. So the first mission was setting a system to extract the piece of wood. After a couple of hours, Tyler managed to lasso it, and then the next step was setting up the Z-drag that would get the wood out of the way.

Brooks would be filming from river right, as he hung from some rocks next to the edge. Rush held the downstream camera. Tyler waited at the bottom, just in case. Only I would run it. 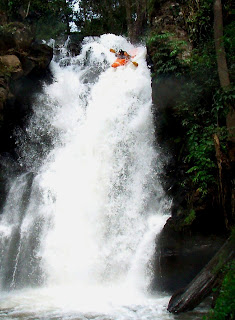 “ Peel out of the eddie holding a 45º downstream angle, gather some speed in that direction until I would spot the flake which I’d be aiming (just left) for. Hard right semi-boof stoke, massive left boof stroke, and I’d be airborne just above the lip of the big fall, trying to turn my boat 90º just before landing. Stabilize my boat with a right stoke that would melt me right into the 40 foot freefall. Tuck forward, hit the pool, and float up”.

Such a slim line… As I hit the pool at the bottom I would realize that it had worked out. I would just come up and start cheering, after nailing my line successfully. Took me a while to believe it really.

Then we still had a good section of whitewater to run.

Rafa Ortiz
Posted by Rafa Ortiz at 8:13 AM 2 comments:


The Newfoundland trip is in the books and with it the next in the Series of The Lost World: Hotel Charley vol. 3 teasers. On a whole Newfoundland has the most incredible potential for first descents that I have ever seen. Over 2 weeks Team Jackson memebers Jesse Coombs, Ben Stookesberry, Chris Korbulic, Joel Kowolski, Nick Troutman, Darin McQoid, along with founder and son EJ and Dane where able to establish 6 new navigable stretches of river during a record dry October. Watch for clips from the Epic Cloud Gorge mixed into the footage featuring high volume slides accessed by an Epic float plain shuttle. On one such slide EJ shows us where playboating can pay off in the class V. Check out nobignames.blogspot.com for the full story with photos.

Unseen waters in the Estado de Mexico. Part I: the scout 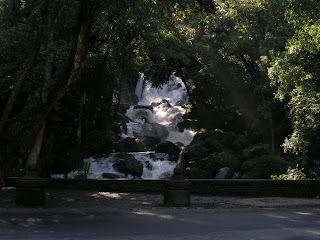 The Estado de México is located just West of México City and hosts some of the most amazing geology in the country. Almost any extreme sport can be practiced (excluding snow sports maybe, México, remember?).
As for kayaking, this weekend I went scouting some waters that have never been run, and are waiting anxiously to see a kayaker in them. The rivers are described as being really technical, continuous and specially dangerous. Flatwater is just a dream when paddling in a river that has only eddies in between the toughest rapids and falls.
By the end of October, myself and the YGP crew will be working on a hardcore expedition on these beautiful rivers, which will be filmed for a National TV show.
Stay tunned for the real deal.
Rafa
Posted by Rafa Ortiz at 10:34 AM 3 comments:

This is not a laughing matter

The Gear We Use